Visualized results from a multiple correspondence analysis across 4 node importance measures: centralities of betweenness, closeness, and eigenvector, and infomap’s flow score. Main figure displays per users across all hashtag groups, while the bottom-right embedded figure aggregates the results per hashtag group.

In this article, we document how Twitter is embedded within the U.S.-Mexico border and used to reorganize the oppressive conditions perpetuated by the border’s sociopolitical history. We do so through a mixed-methods case-study of three polarized, yet tangled activist movements on Twitter, each of which responded to Trump’s border wall plans and zero-tolerance policy that separated asylum-seeking im/migrant children from their families. The hashtag movements included the liberal /#FamiliesBelongTogether supporters (FBT), Trump Republican #BuildTheWall supporters (BTW), and liberal Anti-Wall (AW) #NoBorderWall and #TrumpShutDown denouncers. Overall, findings demonstrate how the liberal activist movements inherited systemic issues of the broader U.S.-Mexico border infrastructure. We call for TPC to continue developing research agendas that learn from social activist networks, so the field can understand its role in shaping the broader media infrastructure. 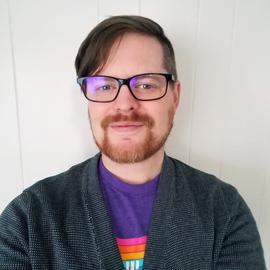 My research interests include the relations created when writing code and theorizing the digital cultural rhetorics of white supremacy in the United States.